Do you dream of heading to Africa? Then you are almost certainly eager to see and perhaps even photograph some of the many beautiful creatures that inhabit this content. Many people have their favorites. They would love to spot from the majestic lion to the gigantic elephant. But which animals are the rarest and most challenging to find or see when you visit Africa? Here are a few of the continent’s most elusive animals that you’ll be lucky to catch a glimpse of on your safari. The African animals list of the rarest and elusive species.

Rare to see the Aardvark

The Aardvark (Orycteropus afer) is an odd, native rare African animal. It looks like an oversized hairless rodent crossed with some sort of pig. With its unique look, you would think it would be quite easy to spot one of these in the wild, but they are quite elusive for several reasons.

First, as any safari guide will tell you, these animals are nocturnal. While you might spot one moving around through the day, this is quite rare. As such, when the sun is high in the sky, it is likely they will remain hidden, out of sight in the undergrowth. Despite their nocturnal nature Aardvarks are quite common in sub-Saharan Africa, so you may well spot one in the late evening. However, the creatures are also quite shy. They will run as soon as they spot you and are surprisingly fast. So, if you do see one, you’ll need to be as quiet as possible and resist making sudden movements to get that photograph.

This funny animal, the Aardvark, has so far not crossed my path in the bush! It seems this species is a master in hiding. Photo Credit @David

By now, one of the rarest animals to see in Africa, your chances of seeing one in the wild are sadly quite close to zero. Many people are not aware that panthers are born due to a recessive gene referred to as Melanism. That gives the beautiful feline its black coat. A common misconception is that a panther is a type of big cat species, but they aren’t. A panther can be a jaguar, a leopard, or a cougar that has this recessive gene. Even safari guides will be lucky to spot one of these creatures.

If you want your best chance of spotting one in the wild, you need to head to the beautiful hills of Mount Kenya. Here, you may get lucky and catch a glimpse of one of these big cats roaming the jungle terrain.

Actually, a photograph of the one most elusive animals In Africa should be here – The panther or better said a black leopard. Sadly to see this rare African animal would be for me the lotto win. No photograph is available from my photo portfolios. Also, I have never seen a photograph so far of a black leopard in Africa, but, therefore, in India.

While not as rare as the last two female remaining Northern white rhinos, there are only five thousand black rhinos in the wild today. As such, we consider being critically endangered species making them an unlikely guest appearance on your African safari. However, sightings do occur, and if you’re lucky, you’ll see the rhino run. Despite its notable size, the black rhino can run at 55 km / 34 miles per hour and is quite aggressive. You certainly don’t want one to hit your jeep, that’s for sure! The difference between a white rhino and a black rhino is; a black rhino has a hooked upper lip, and a white rhino has a square lip. This rhino species is one of the most elusive animals in Africa.

Black Rhinoceros (Diceros bicornis), to find them, is not an easy task, but when you know what to look for! Keep an eye on a large grey “rock” when you do a self-drive safari. Explore more photographs of these endangered animals.

We know them to be fast and fearless; these creatures may also be camera shy as very few people spot one. That is perhaps due to their size. While the cute skunk-like animal takes on massive predators in the wild, it’s only small and burrows deep under the ground. As fearless as the honey badgers (Mellivora capensis) are, they even attack snakes. Interestingly, if you’re looking to spot one of these little critters, you may want to head to the Kalahari. According to game rangers, this is the place where most sightings do occur. I should add. I experienced sightings of these funny animals every day early mornings in the Okavango Delta. 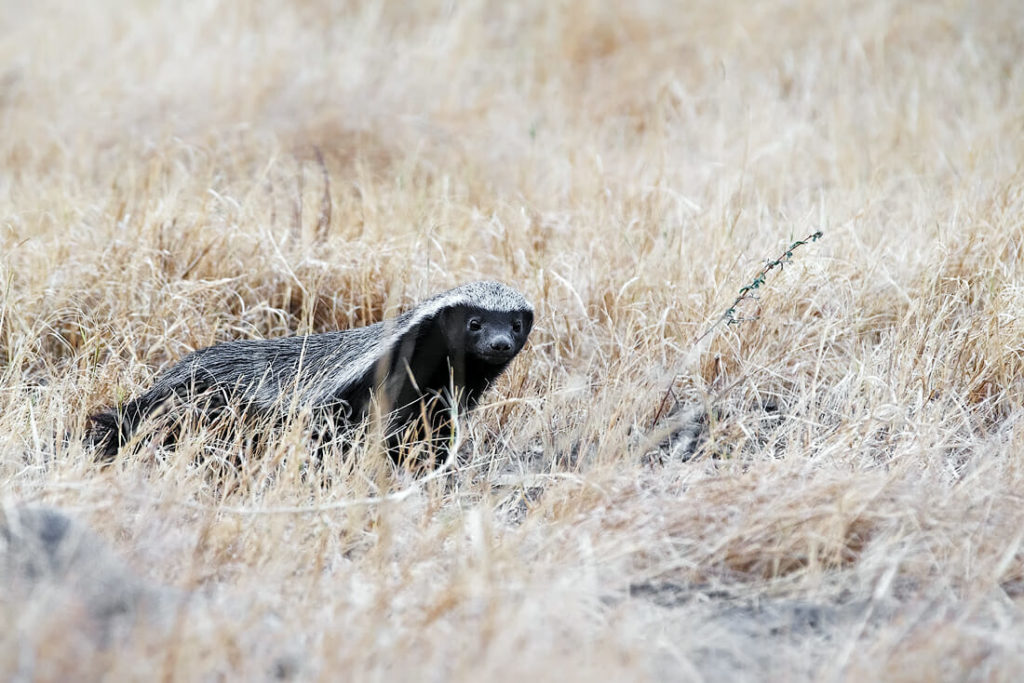 One of the funny rare African animals, in my opinion, is a Honeybadger. It’s not often you see these little chaps, but in Botswana, we saw some nearly every day on our Photo Tour. We were lucky!

Another endangered animal, there are only 2000 to 5000 African wild dogs (Lycaon pictus) living in Africa. The good news is that if you do manage to spot one, it’s likely that you’ll see a lot more. African Wild Dogs are pack animals and where one goes as many as twenty more may follow. The African Wild Dog is a beautiful creature despite looking rather odd. With a bushy tail and big bat-like ears, the unknowing adventurer may not even realize what they’re looking at spotting one in the wild. While known as a dog, the animal is close to a wolf, and we see it around sub-Saharan Africa. So, where can you spot these pack pooches?

Well, you may want to head to Savuti Chobe National Park around December and January. It is during this time that zebra migrate through the park. The wild dogs often show, hoping to get a meal out of the fresh food supply. Alternatively, you can head to Zimbabwe, where you might see a few in Hwange National Park or Mana Pools. 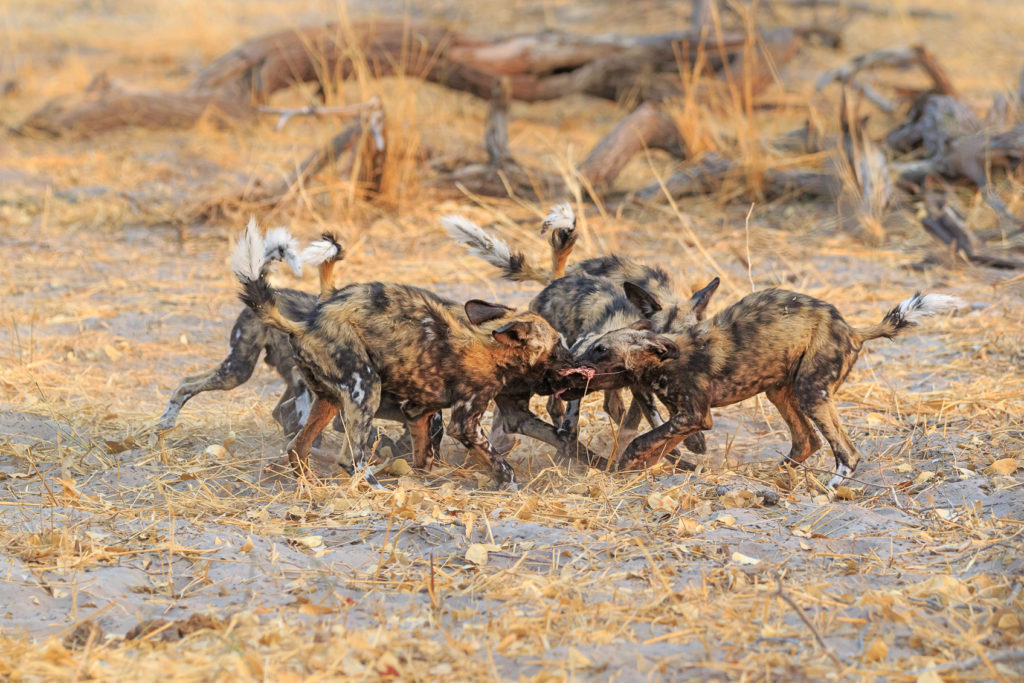 African Wild Dog Cubs fighting over a piece of meat the pack has brought to them. These beautiful Wild Dogs are as well, as so many species, victims of habitat loss. Explore more of our Painted dogs photographs.

We bet you didn’t know there were penguins in Africa, but there are. That is the only type of penguin that lives and breeds in Africa. With a white underbelly and a black top, they do look like the typical penguins you’d find in colder climates. One noticeable difference would be the dark stripe over their chest. Sadly, the population of African penguins is declining due to oil spills and other environmental issues. Again, an endangered species on the African animals’ list. However, you can still spot them dotted around Africa. The Western area of South Africa homes a significant percentage of its population. 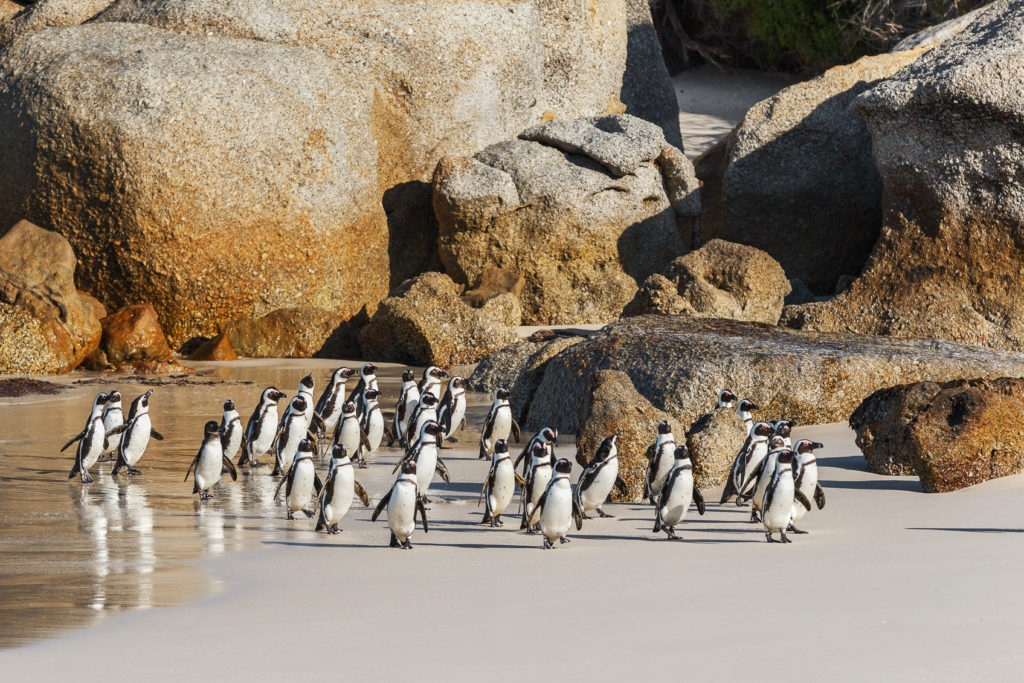 African penguins (Spheniscus demersus) coming back late afternoon from fishing in South Africa. Discover more of our flightless birds in our portfolio.

Pangolin – One Of The Rarest Animal In The World

Another rare creature to spot that safari guides have a hard time finding is the Pangolin. This creature looks like an anteater with scales. It can also be described as an aardvark with armor. When it’s threatened, the animal will roll into a ball, and it looks rather incredible. It’s is most likely the inspiration for the Pokemon Sandshrew. These creatures are nocturnal and after multiple safari trips, you probably still won’t have seen one. While they are hunted for meat, these rare African animals are an endangered species. Learn more about the conservation efforts of the world’s most trafficked species, the Pangolin. 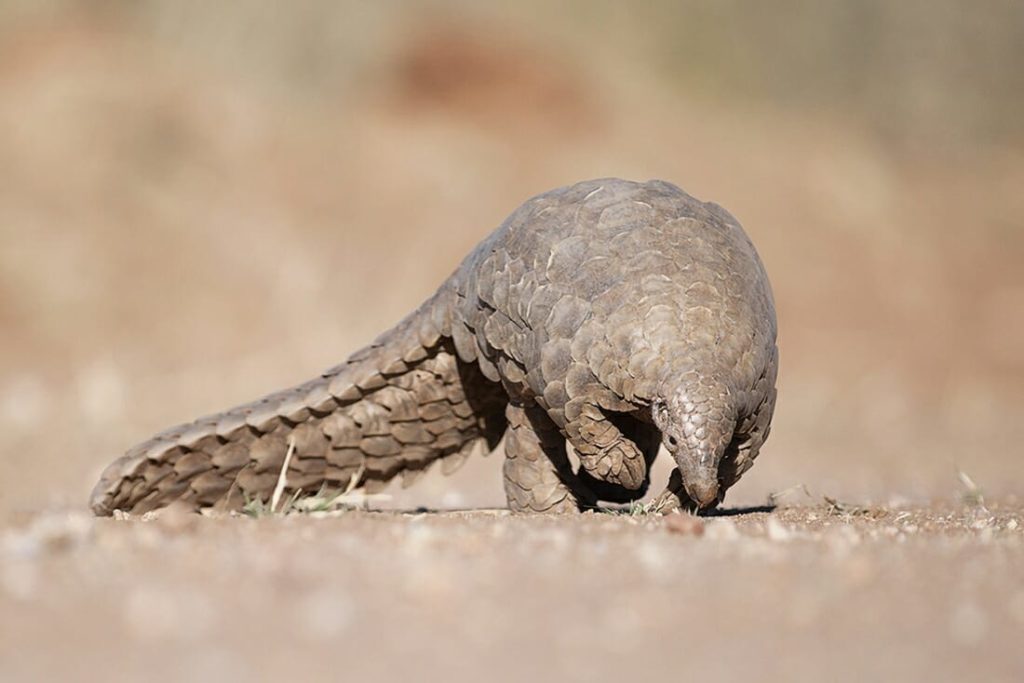 Pangolin is one of the rarest animals in the world. It is unknown how many animals are left in the wild. Indeed, a critically endangered species according to the IUCN Red List. Photo Credit “2630ben”

Finally, the smallest wild cat living in Africa will hardly ever be seen by humans. The black-footed cat looks a lot like your typical domestic animal. However, its stripes and colors make it a rare beauty, and with only ten thousand in the wild, they are tough to find. As well as this, the little cats are shy, nocturnal, and live a life of solitude. Often referred to as the ‘anthill lion’ due to its ferocious nature and tiny if you are lucky enough to see one make sure you snap a photo. You’ll undoubtedly have earned bragging rights if you do! 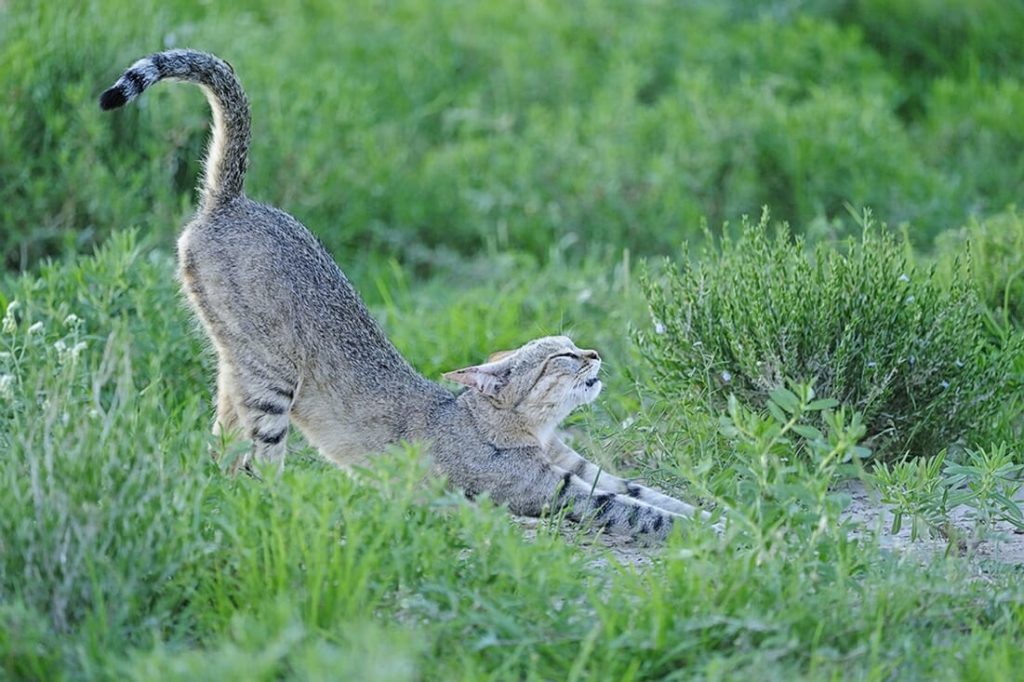 Photographs Of The Elusive Animals

The photographs of the Aardvark, Pangolin and the black-footed cat are not from my photo library. I have bought them from a nature stock agency for this blog post. So far, none of these three elusive animals have crossed my path in Africa, sadly. I do hope they will someday. Every photograph is labeled with the photograph courtesy that I purchased. I am very sorry that never is the full name mentioned who took the photographs. It was not given!

Did I wake your curiosity for wild animals in Africa? The African landscape is just as amazing. This continent is a dream, and when you get up early enough, you will see the utmost beauty it has to offer for you. See yourself, our African landscape pictures taken early morning, enjoy the view.

Discover more wildlife photos: Wild animals photography – amazing photographs for every space. In my nature photography collections, I also offer licenses of photographs to buy online. You can find info about purchasing pictures as wall art on our photography prints page. 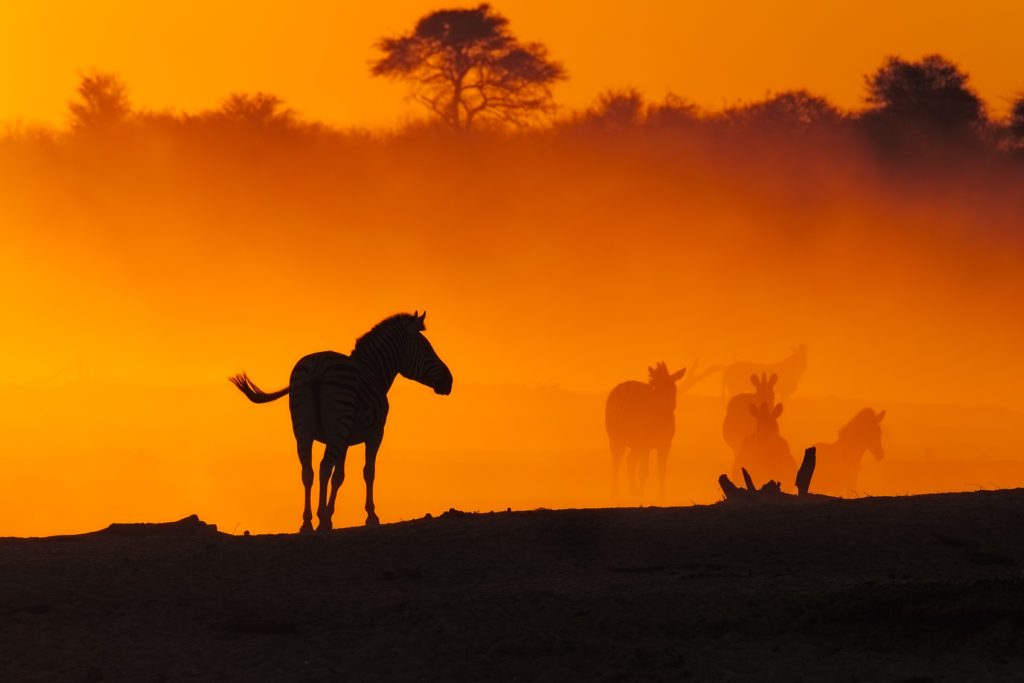