Humans have been studying elephants since the 17th century, yet we are still discovering new facts about them, even today. To help you learn more about these magnificent creatures, here come plenty of fascinating elephant facts. 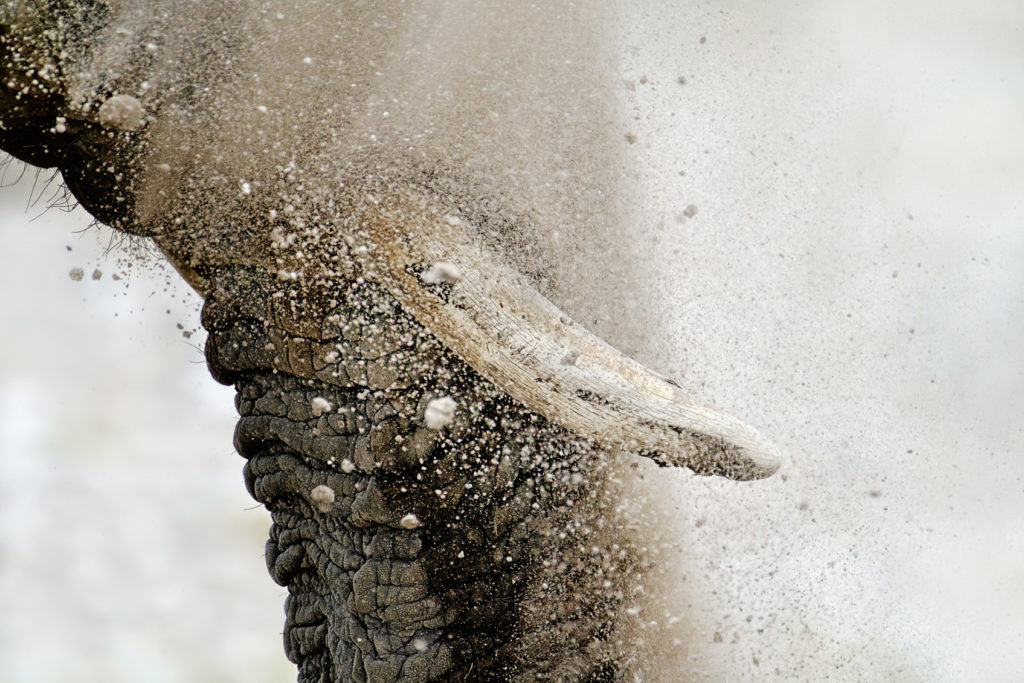 This elephant bull is using its trunk to spray sand and dust over its forehead to protect its skin against the harsh sun rays of the African sun.

a little history of elephants

It is believed that elephants evolved from the Moeritherium, a creature that appeared approximately 50 million years back. These mammals were about the size of a pig and semi-aquatic. Moeritheruims evolved into proboscideans Certainly, this order of mammals includes living animals today and extinct creatures like mammoths and mastodons.

As the Proboscidea evolved, their limbs became longer, and they developed larger teeth and skulls. These creatures grew in height, and the trunk also became longer. It’s believed that the elephant trunk developed to help the proboscideans reach water and food at ground level.

The Elephantidae family gradually evolved from the Proboscidea order. Both the Asian and the African elephant are included in this family. Close ancestors before these species were the trilophodon and the deinotherium. The trilophodon had four tusks, two extending from its upper jaw and another two extending down from its lower jaw. The deinotherium had just two tusks, both that curved down from the bottom jaw. 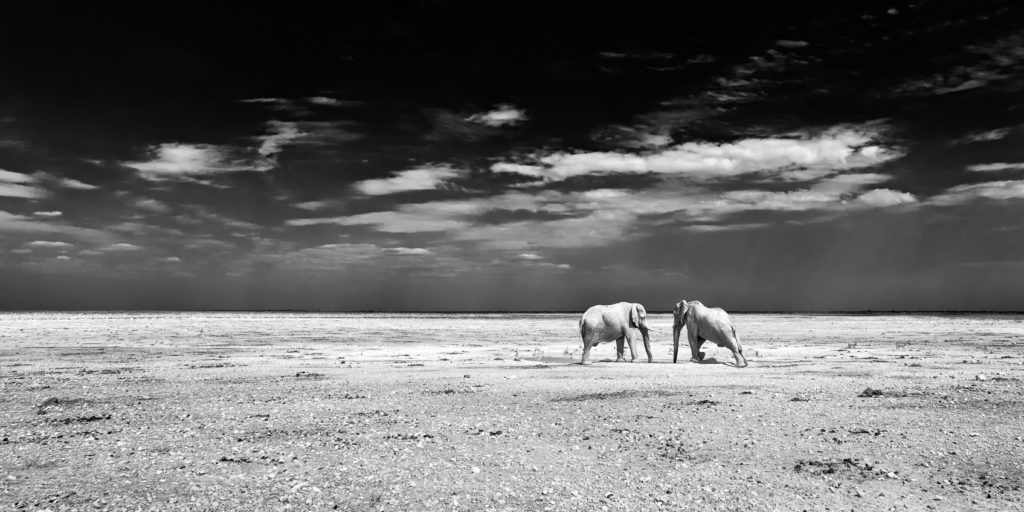 Two elephant bulls are drinking at a waterhole. A beautiful black and white photo of these majestic animals.

A selection of fun elephant facts 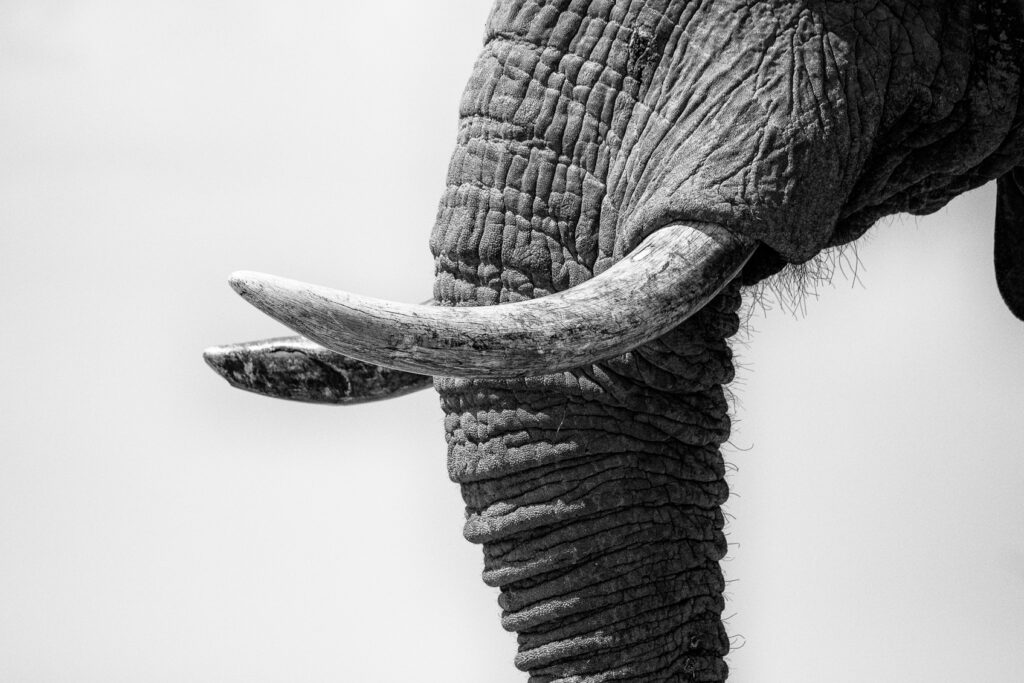 Myth and facts about elephants 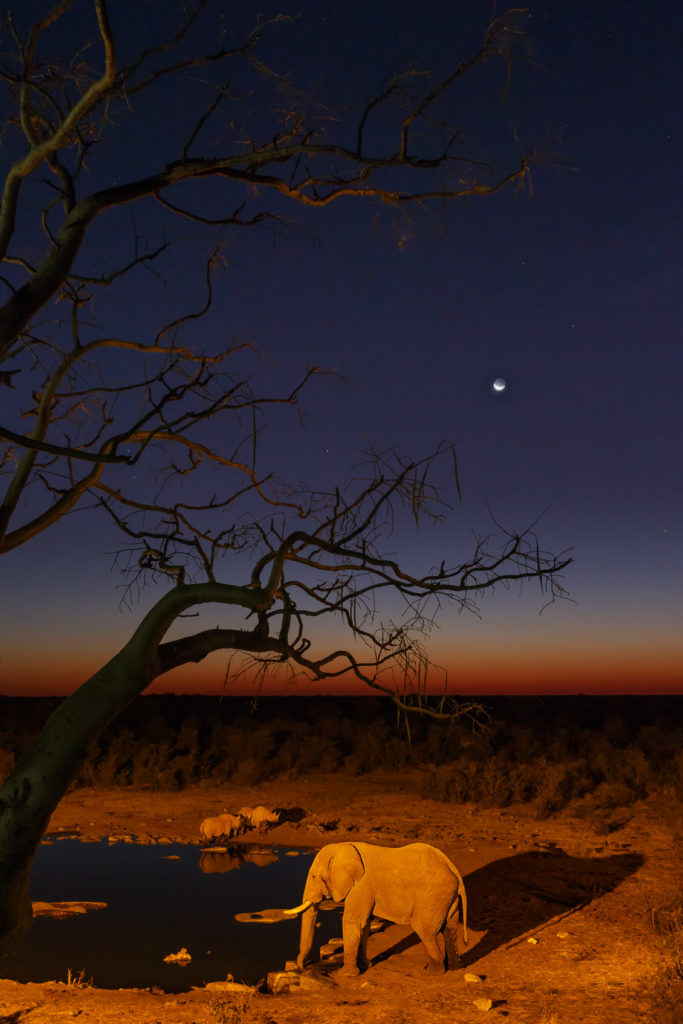 Black rhinos and an elephant bull are a waterhole to drink at the blue hour.

There are plenty of misconceptions about these majestic animals. Let’s set the record straight, and debunk some of the most popular elephant myths.

Do Elephants Use Their Trunks As Drinking Straw?

No. They do not use their trunk as a straw to drink water. Undoubtedly, they use their trunk as an upper lip and a nose. With the trunk, they can bathe, pick up objects, or greet their friends with ‘trunk hugging’. Simultaneously the function of the trunk is to help the elephant smell, grasp, and breathe. One thing an elephant can do is suck water into the lower part of its trunk. When done so, they will squirt the water into their mouth to drink or spray it over their body. 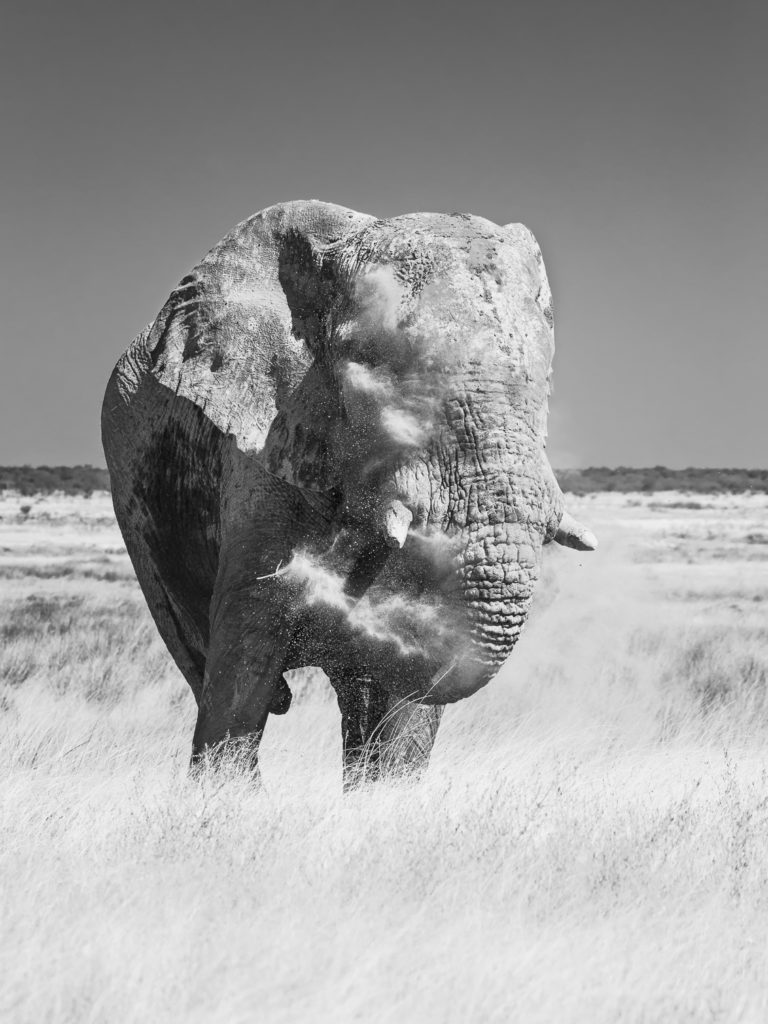 Black and white elephant photo displaying how the bull uses his trunk to dust his body.

Are Elephants Scared of Mice?

We’ve all seen kid’s cartoons where elephants are running scared at the sight of a mouse. While it’s a humorous image, it’s actually a myth. So far there is no evidence that they are afraid of mice. Generally speaking, we humans are the biggest predators for them. However, they are cautious of carnivores, like lions, tigers, hyenas, and crocodiles. Occasionally these predators may prey upon young calves, injured or sick animals.

Does An Elephant Never Forget?

The old saying, ‘an elephant never forgets’ is also a myth! Of course, they are capable of forgetting things. Regardless, they do have a fantastic memory. According to research from TED, ‘two circus elephants that performed together rejoiced when crossing paths 23 years later. They also recognized humans that they once bonded with after decades apart. Regardless, the amazing animals know all members of the herd, using smell and sight to recognize each other. 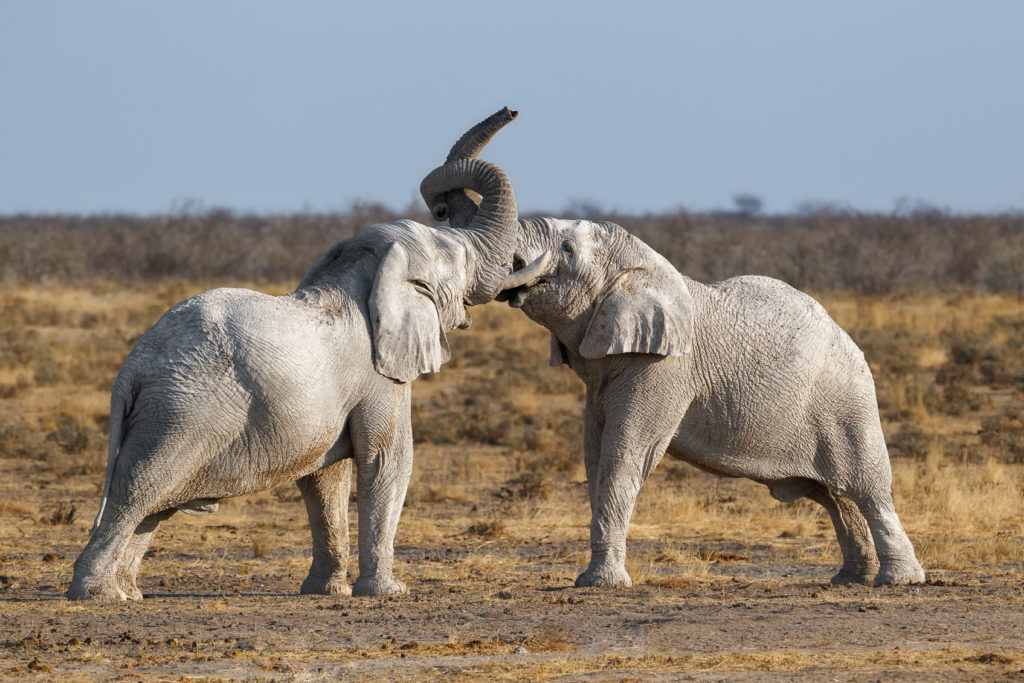 Two bulls are fighting, while their trunks twist around each other. Basically, both animals push with their full body weight against each other.

How Long Do Elephants Live?

The average life span is 56 years. However, it has been known that they live longer. An Asian elephant with 86 years old, broke the Guinness World record in 2003. This animal lived the longest in captivity.

Elephants live much longer than other mammals, but why is this? Researchers believe that it is because the older female animals are needed to help to protect the calves. Scientists also believe that living longer may be reproductive while their mothers were alive had higher rates of reproduction.

How Much Does An Elephant Weigh? 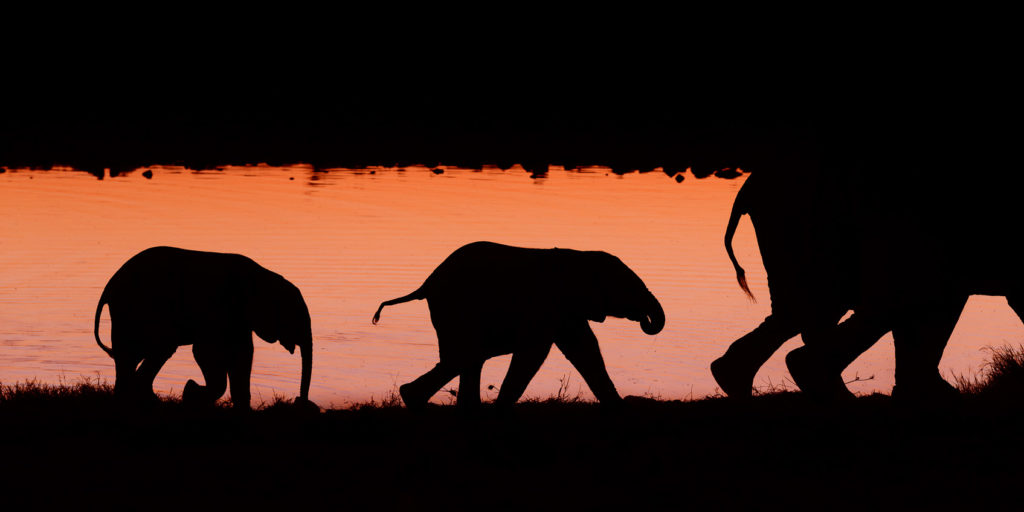 2 small baby elephants following their mothers. The vibrant colors come from the amazing African sunset reflecting in the water.

What is the difference between an African and Asian elephant?

Indeed there are several differences between these two species. As we can see from above, their body weight and sizes. African elephants are taller than Asian elephants. In the Asian species, only the male can grow tusks, but not the females. The African species, both can grow tusks, female and male.

What is the difference between the two species of Africa?

The Forest elephants are slightly smaller than the African Savannah elephants. For example, their tusks are pointing more to the ground, as well as their ears are more ovular shaped. The Savannah elephants have more curved tusks. You will notice this in animal photos.

Undoubtedly elephants are majestic animals. Therefore, it is not surprising that wildlife photographers love to take their pictures. You may like to read about our meerkat pictures and fun facts about these cute animals.

Photography lovers can purchase fine art prints, shipping is free. You can also purchase a license to print the image of your choice yourself. Explore our portfolio of nature photos.

The animal photographs above are part of our Wildlife photography collection, which also includes: 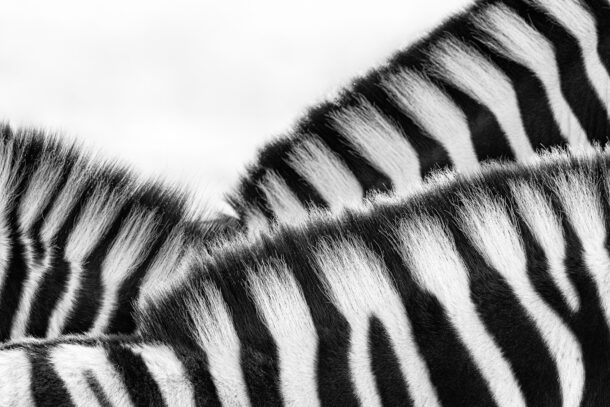 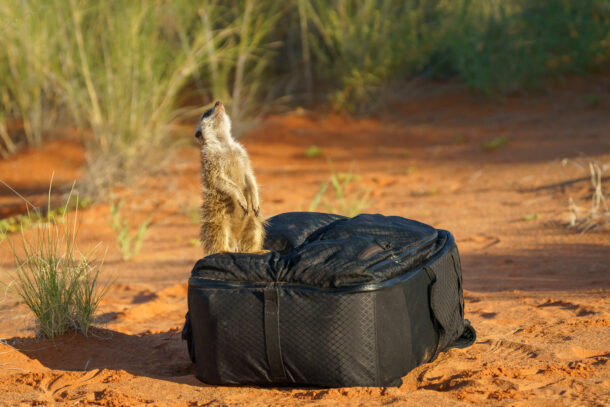 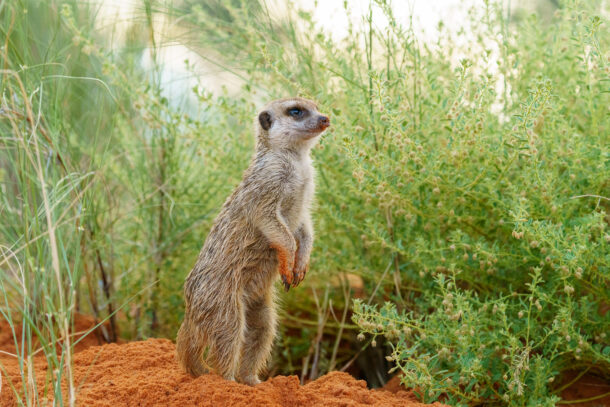 Meerkat Standing Up Between Green Grass 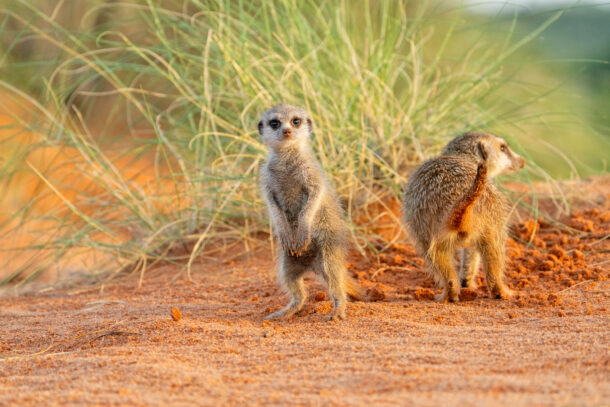 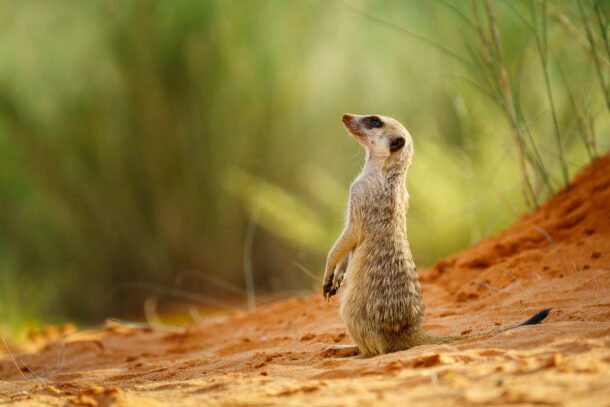 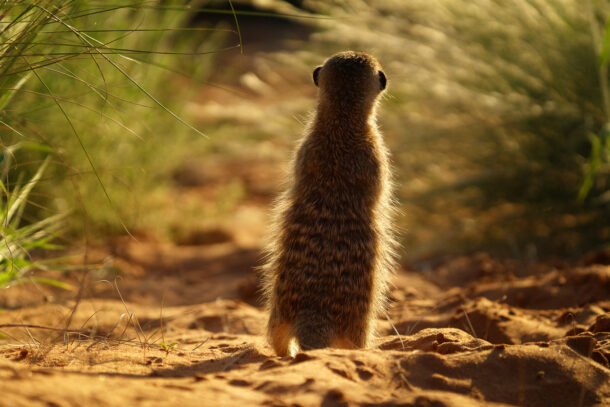 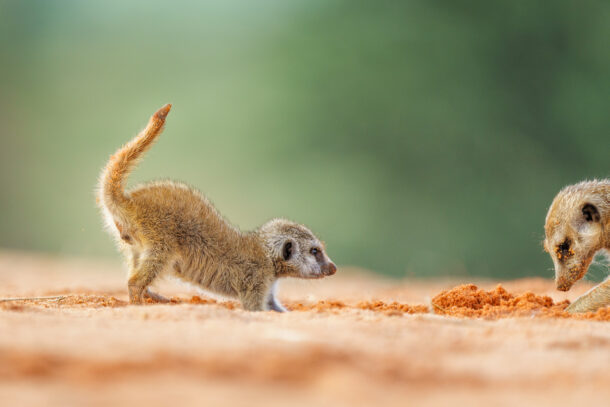 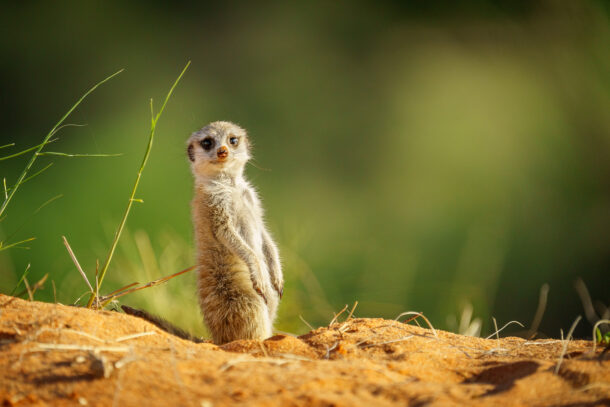 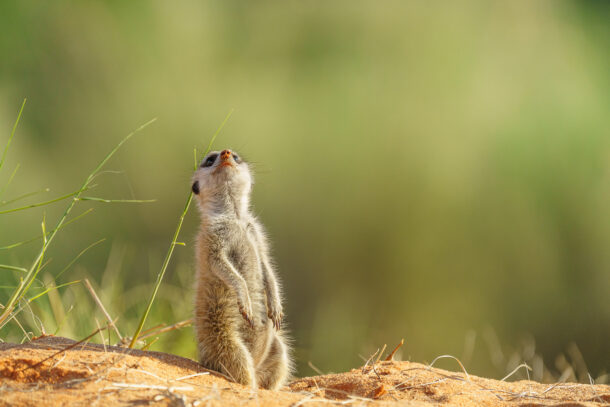 Baby Meerkat Looking Up At The Sky 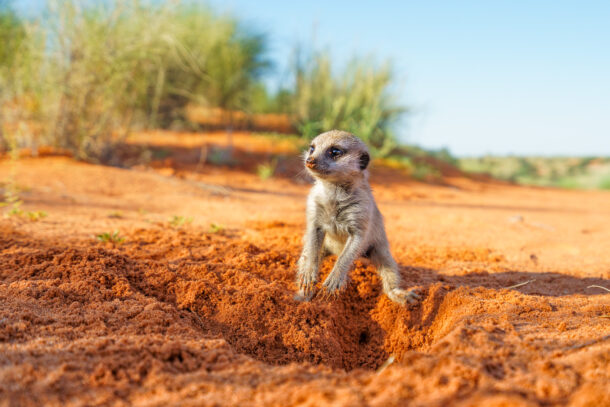 Baby Suricata Is Digging A Burrow 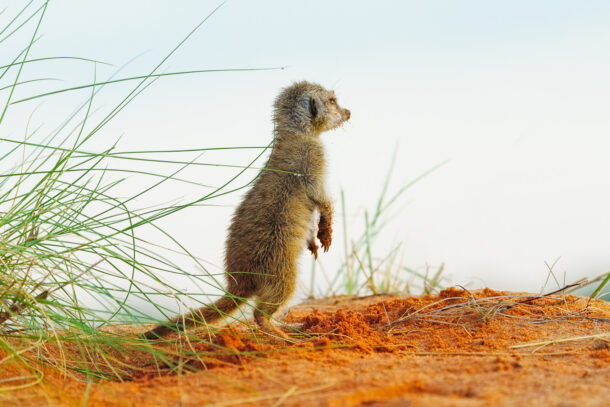 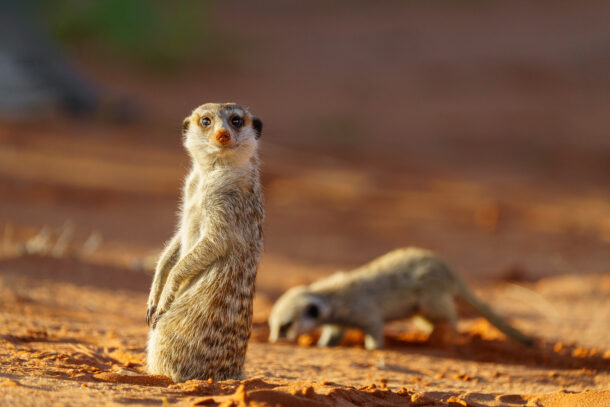 Cutest Meerkat Looks At You 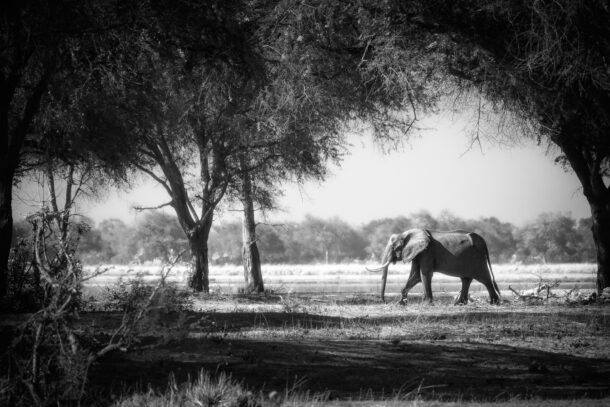 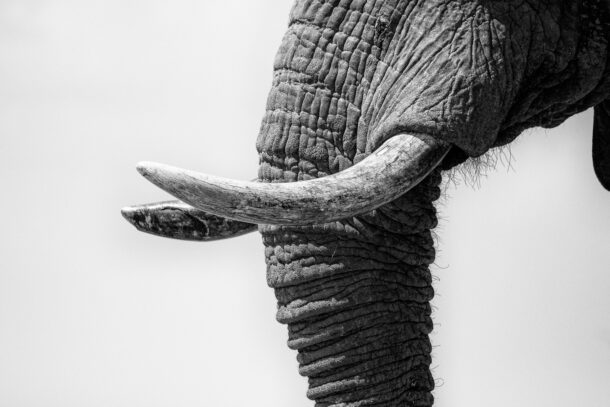 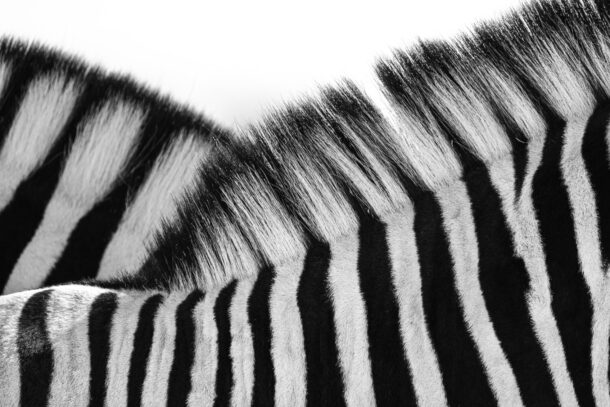