What is Africa is known for? Of course for its sheer diversity and grandiosity of its wildlife above all else.

They are one of the continent’s greatest assets – an attraction to tourists the world around and a delight to photographers and nature enthusiasts alike. If Africa is known for anything, we know it for the sheer diversity and grandiosity of its wildlife above all else. Here, we are going to look at some of the most famous African animals. Indeed, the significance they built up over the years. These make thrilling subjects not just to photograph, but to study and learn about as well.

Elusive Rhinos — One Of The Most Famous African Animals

The second-largest land mammal in the world (the first will come a little later). There are two species of rhino, black and white, that live in Africa. Besides their immense size and impressive horn, we know them best for their cantankerous nature. The elusive Rhinos we assumed for a long time to be highly solitary. But more recent evidence suggests that the elusive creatures come out under the stars. Undoubtedly, not only to socialize with one another but to cohabit peacefully with other wildlife at their favorite watering holes. Though rhinos are hard to spot, they live in a variety of different locales in Africa. From broad sweeping savannahs to within the dense jungle vegetation. One of the more noteworthy sights of the African rhino is their unique method of bathing. Undoubtedly, that primarily includes soaking their tough skin in mud to protect it from the sun and biting insects. 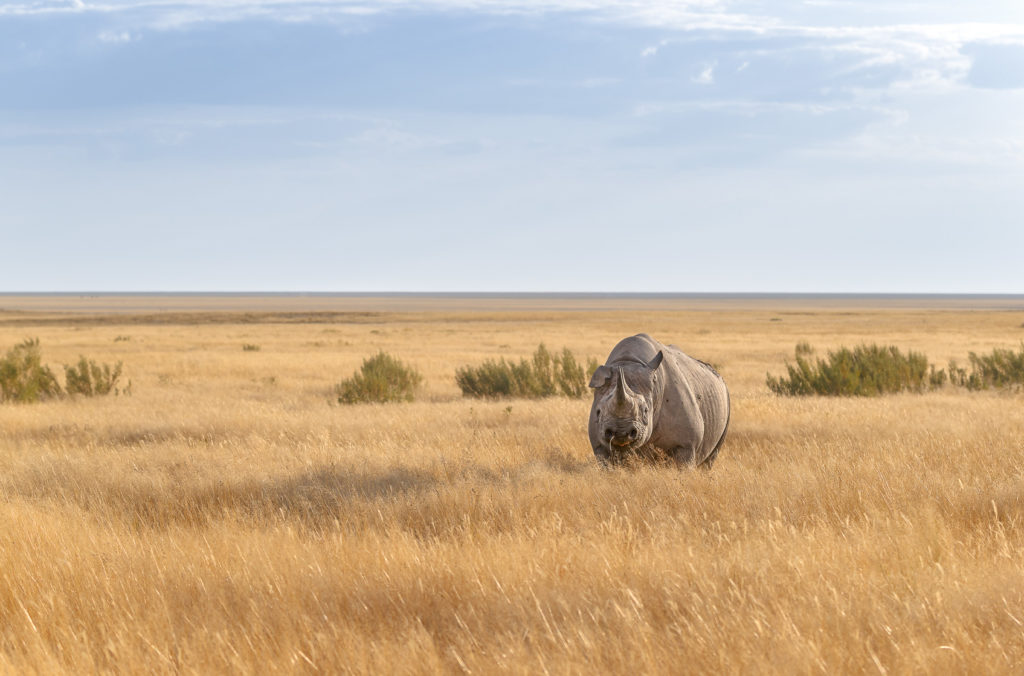 The elusive Black Rhino is grassing in the savannah of Namibia. We know this species as one of the most famous African animals.

The “king of the jungle,” lions do not, tend to live in jungles very often. Rather, these big majestic cats are the kings and queens of the vast savannahs. A real predator, lions have no predators of their own and represent a threat to the vast majority of other creatures they share a habitat with. Lions strike the most impressive figure while hunting. Using pack tactics, males and females alike will join together not only to hunt small game-like antelope but to collaborate and takedown bigger creatures. The larger animals are buffalos and even giraffes. Living in pride as considerable as 30 cats, seeing a family of lions roaming the savannah is a sight, unlike any other. 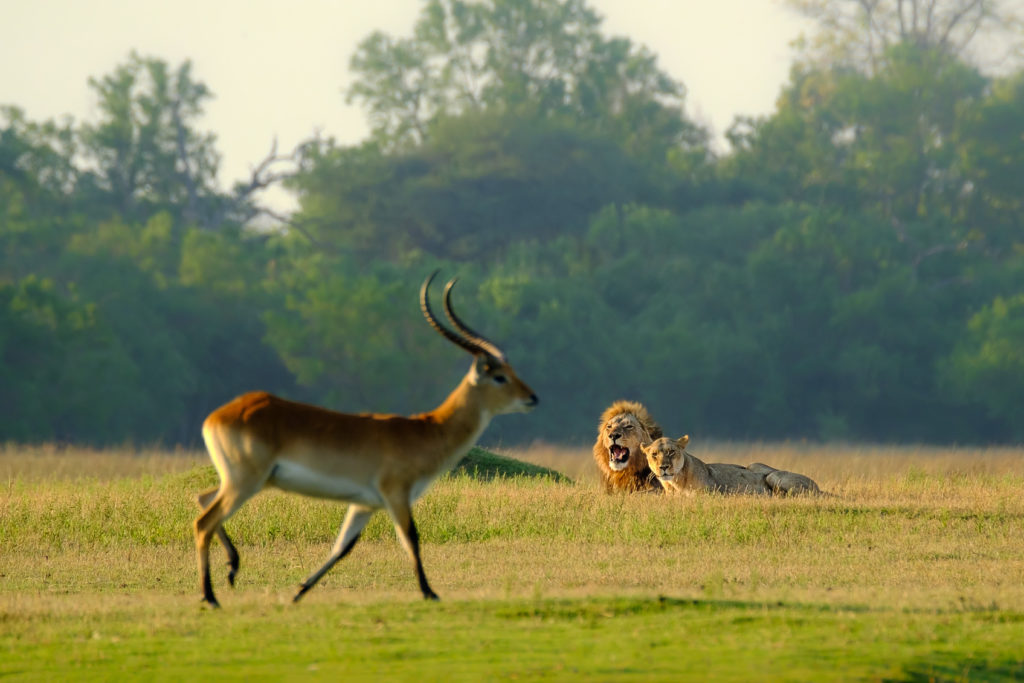 Impressive Lion and Lioness are looking after a Lechwee when it is passing them in the Okavango Delta. Aren’t lions also one of the most famous African animals? Of course, everybody knows these predators.

One of the more outlandish African mammals, giraffes has been part of human history for millennia. Some folk tales, including those from East Africa, speculate as to how the giraffe got such a long neck. That is including one story about eating one too many magic herbs. Indeed, giraffes spend a great deal of their life eating. Those long necks allow them to reach leaves from trees that other animals have no chance of eating. Meaning they can linger in solitude around patches that other animals have long abandoned. Giraffes aren’t entirely sociable. However, when two male giraffes meet, it is often to compete over a female. Indeed, these clashes almost resemble fencing or a boxing match. With both giraffe bulls looking to land blows using their strong, long necks and horned heads. 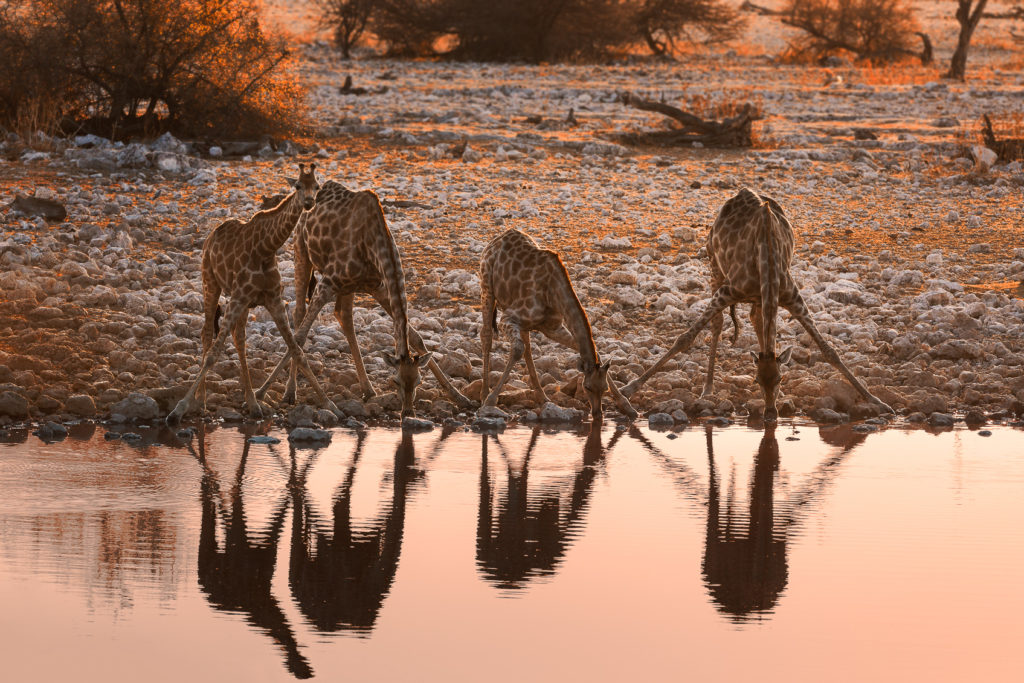 Four gorgeous Giraffes are drinking at the waterhole. When the light slowly fails, and a new world will awake in Africa. Some hidden dramas will reveal in the dark, with some of the most famous African animals.

Contrary to the pack life led by lions, the second most giant cats in the world, the sleeker, spotted leopard lives a much more solitary life. Undoubtedly, incredibly fast and stealthy felines are some of the smartest hunters on the continent. Using their spots to blend in with the tall grass and bushes, they stalk hoofed animals like antelopes. Sneaking up for getting closer until they can use their superior speed to catch them in one dash. After hunting, leopards show the rather odd practice of carrying their prey up into treetops. They can come back and enjoy their meal after it has time to warm in the sun. 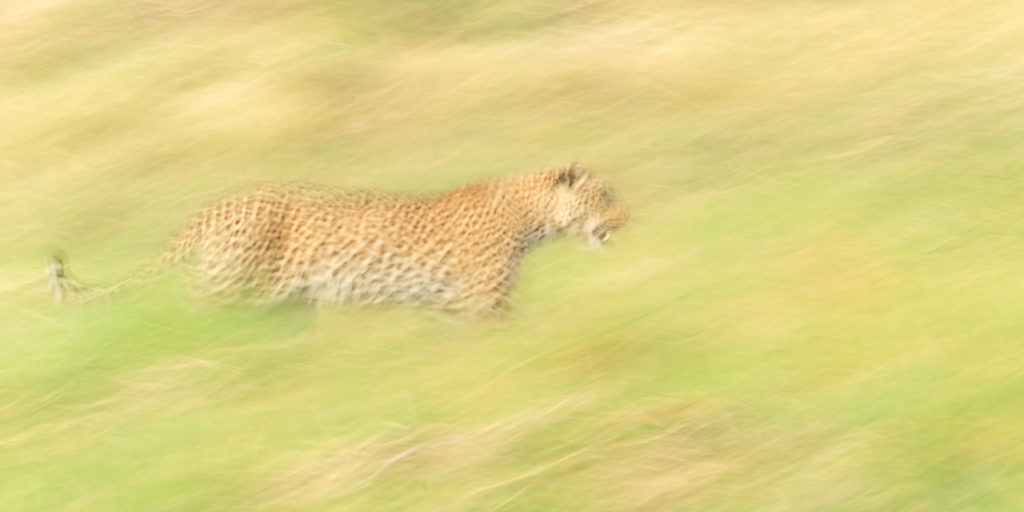 One of the most famous African animals is as well the elusive African leopard. The predator is strolling through the grass in the African bush. That photograph we took with an extended exposure time gives us this effect of motion.

If there’s a large body of water in Africa, there are likely to be hippos. Hence how they got their names from the Greeks, with “hippopotamus” meaning “water horse.” They are much bigger than horses, of course, making them the third-largest land mammal in the world. Hippos spend up to 16 hours a day in the water. You can most likely find them bathing in the day or heating at night. Despite their seemingly peaceful lifestyle, however, hippos can be very aggressive and vicious animals. Their giant teeth and tusks they use to fight off those they see as threats. That is mostly for defense purposes. However, as hippos eat little else but grass, up to 36 kgs / 80 lbs of it a night. 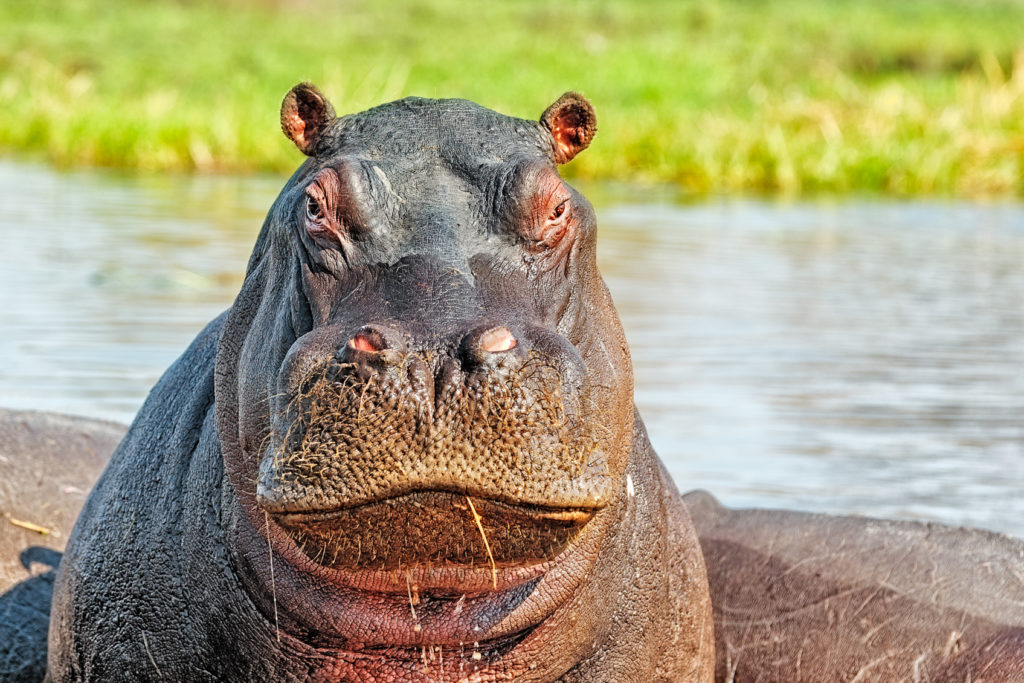 That is another species of the most famous African animals. That mighty hippopotamus gives us a beautiful portrait photograph. Lifting from the refreshing water, also looking straight into the camera.

The Most Famous African Animals — The Giants

Undeniably, the African elephant is the animal that draws the most attention, from tourists, photographers, and conservationists alike. For sure they are the most famous African animals which everybody wants to see when on Safari. They are the single most significant land mammal in the animal kingdom. They measure up to 3.3 meters / 11 feet tall up to their shoulders. With a massive weight up to 6000 kgs / 13227 lbs. Also known as African savannah elephants or bush elephants, their tusks, ears, and trunks are all equally iconic. African elephants, we know as “gentle giants” since they are relatively peaceful. Still, when they are defending their young, sick, or wounded, then we know them to cause massive damage. Elephants have a strong pack bond, and we see them mostly migrating as a family. Because of their immense size, very few predators attempt to attack them unless desperate. 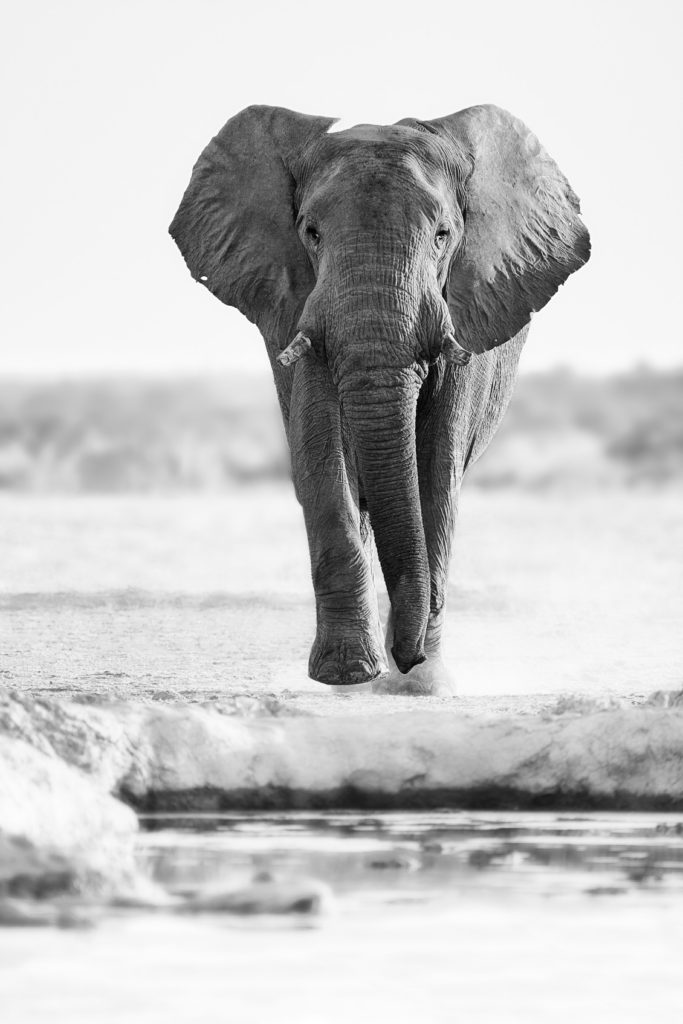 The giant, African Elephant bull walking towards a waterhole in the Makgadikgadi Pans in Botswana.

Though perhaps not as majestic as the elephant or as fierce as the lion, indeed, the antelope still attracts attention from visitors. There are 91 species of antelope, most living in Africa, throughout its savannahs, woodlands, and deserts. Unlike deer and other horned animals, antelopes keep their antlers throughout their lifetime. Skittish, graceful, and small, they are some of the most common prey for predators. But their high speed and sensitivity to danger help them escape more often than not. Though quiet and spending most of their time grazing. Photographers and tourists hope to catch antelopes “stotting,” an odd behavior that involves repeatedly jumping straight up in the air. Indeed, a graceful motion that we often compare with watching the ballet.

Undoubtedly, the sunrise light returns to the savannah in Africa. The Lechwe stands beside a river in the Okavango Delta. They are backlit from the beautiful early morning light. Now we wonder, do Lechwe belong to the most famous African animals? Indeed, they do.

The wildlife of Africa will continuously continue to keep drawing attention from visitors, nature photographers, documentarians, and all kinds of people. Explore more of these beautiful beasts up close, take a look through our portfolios of wild animals photographs and our remarkable landscape photography. Discover the mighty elephant bull or read the funny facts about meerkats.

Discover the rarest and most elusive animals in Africa. At night you may get a glimpse of the cat-like Genet.

All the pictures we are selling as photography prints as well image licenses. Information about animal photo prints for sale and stock photographs. 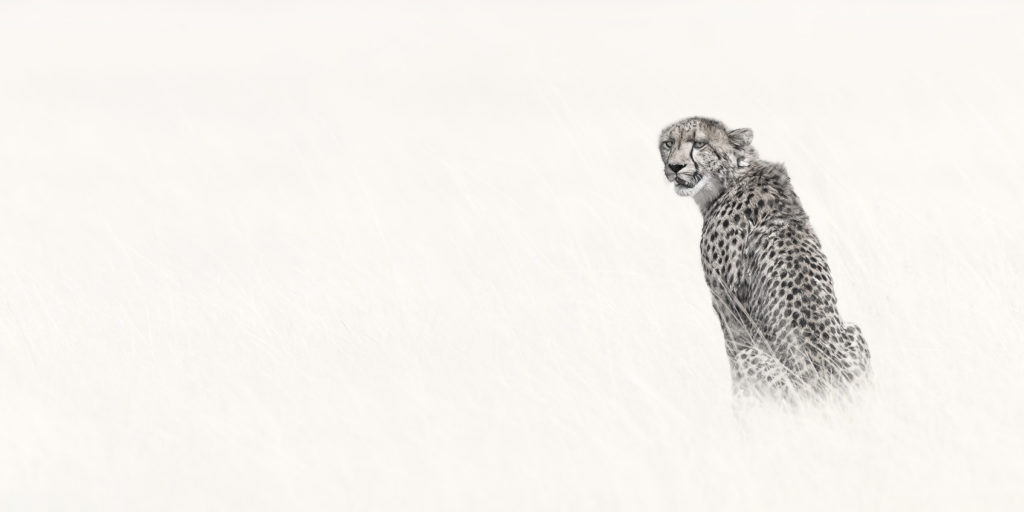 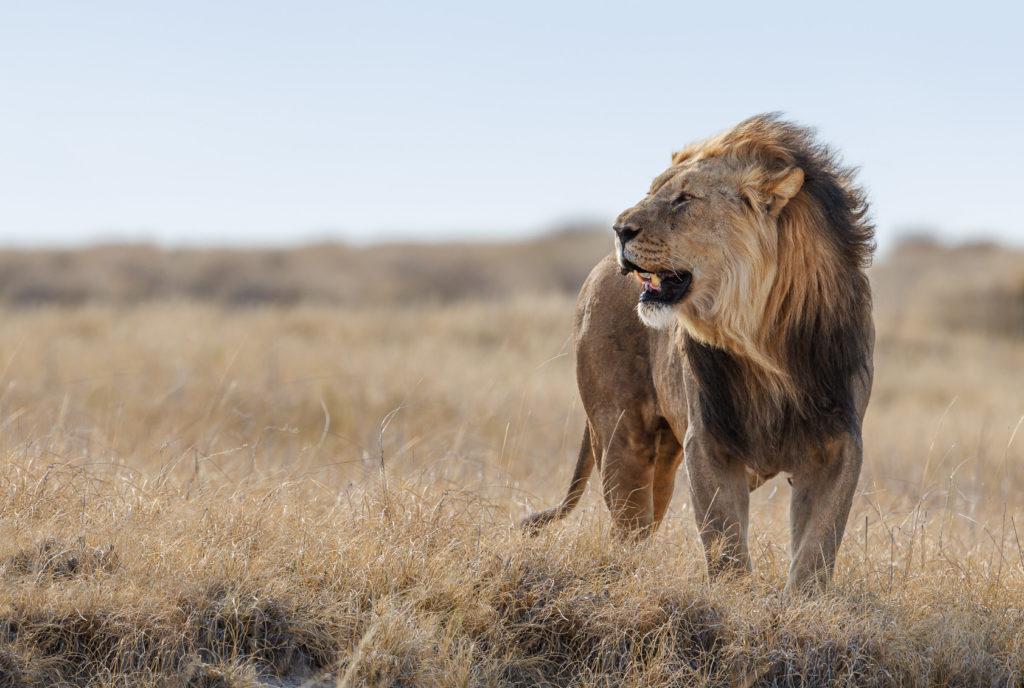