Sweet Memory Of An Wild African Rhino In Africa

Or – “Once Upon A Time’; there ‘were’ many African Rhinos roaming the continent! These wild animals were strolling in peace through the unending vastness of the African Landscape. A Rhino in Africa has nearly no real predators. Of course, sometimes, an African White Rhino calf fell victim to African lions or other big cats. There are the Black Rhinos, Diceros bicornis, and the White Rhinos, Ceratotherium simum, still roaming the continent. Their numbers are decreasing rapidly after each year!

Coming Across An African Rhino

When I came across a Rhino, no matter if black or white, I always called myself a very lucky duck of a Wildlife Photographer, out in the bush. I have witnessed beautiful strong animals, mother’s with their calfs strolling through the bush. Rhino families are defending their calves from a lion pride successful. Sometimes I wonder if they know! Do they know how to protect themselves from humans with guns? Like George, the great strong rhinoceros bull, a Black Rhino, below in the photograph. Is he still roaming his territory out there? Do you know? I don’t. Maybe killed by now for his horn!

This African Rhino bull was very curious and came closer to see what I am. I had put down the camera when he came closer and closer. Watching him checking me out. He was putting his nose up in the air, sniffing, the ears wiggled around, trying to hear anything from me. I was silent, did not even wanted to breathe, just wanted to witness this wild animal close, without a camera in between. He left me in awe, and I can say: I was able to see some of these majestic, magnificent animals in the wild still alive! I followed this proud African White Rhino bull with my eyes till he totally disappeared behind me in the thick bush.

The “humans,” Homo sapiens, have become the BIGGEST PREDATORS for Rhino in Africa. No matter what, these wild animals get poached every month more and more by humans for their horns. The thirst of Greediness of homo sapiens! Will it ever end?

Black rhino in high grassland at the edge of the Etosha national park salt pan feeding in peace.

More info on Vietnamese consumers, which is not only used for traditional medicine purposes. A new trend has come on the table, the African Rhino Horn “Status Symbol” for rich “educated” Vietnamese!

While the number of living rhinos in Africa is decreasing on a fast path, Tanzania faces its largest elephant’s catastrophic decline in numbers from 109,051 in 2009 to 43,330 in 2014! Isn’t that shocking?  Source: www.traffic.org 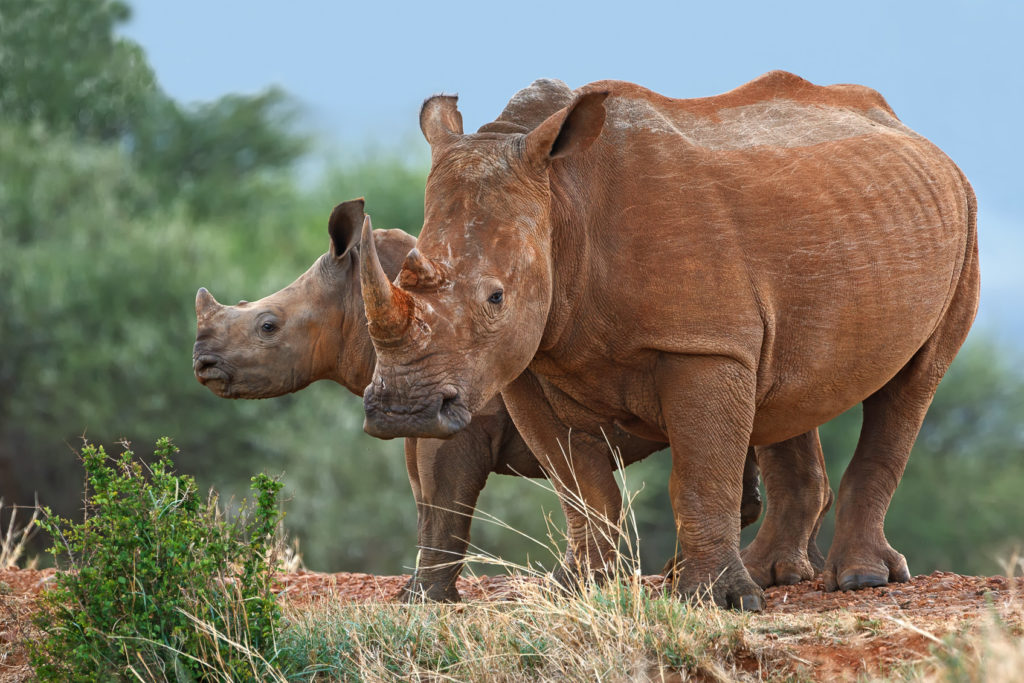 African White Rhino with her calf standing on a hill in the bush. Discover more photos of these endangered species.

The Environment Of South Africa Website Has Written A Very Interesting Article About African Rhino Poaching:

In short, when this Zuma became president, signing deals with China, the number of poached African Rhinos are drastically increasing from year to year. South African’s souls are on “sale.”

The Only Thing Necessary for the “Triumph of Evil” is that Good Men Do Nothing!

Quote above from Edmund Burke.

Get Closer To Wildlife