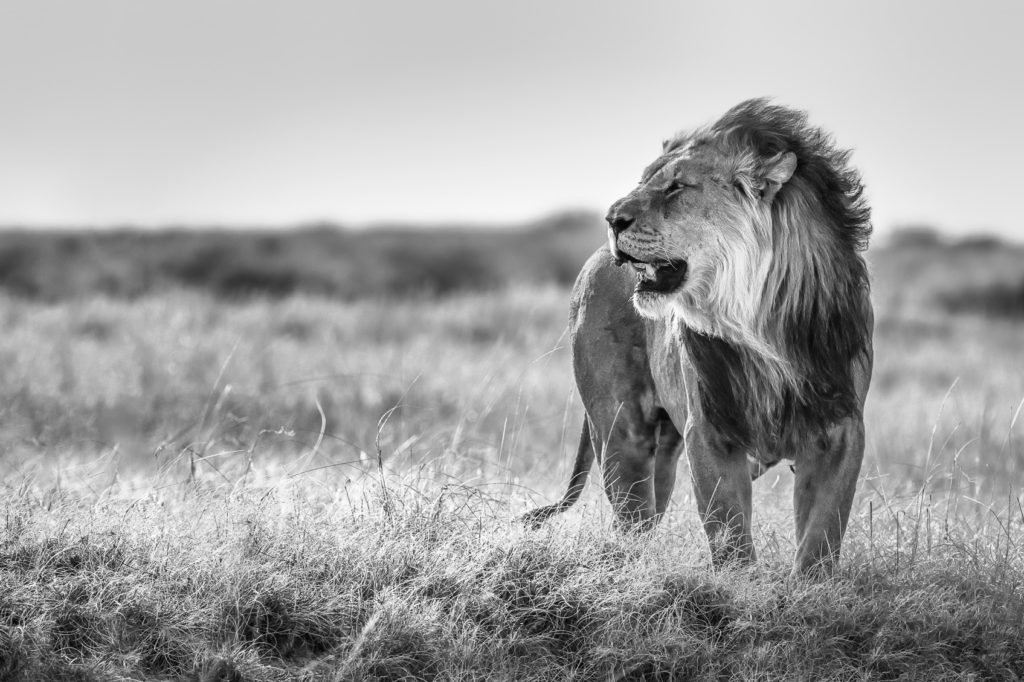 The beauty of African lion photography in black and white. The King of the jungle is standing in the grass at the natural salt pan’s edge in Namibia. However, lions do not live in jungles. They prefer woodlands, savannahs, and dense scrub as their habitat! This beautiful black mane lion photograph you can see in our wildlife limited edition print selection.

A Pride Of Lions Appeared Of Nowhere

The African lion photography in black and white, and the photo above and below I captured in the Etosha National Park in Namibia. While looking for the famous African animals, I came across a herd of running Wildebeest, passing my car. Usually, wild animals walk in peace, no need to hurry at all. They would graze while moving on. There must be a reason that they are running! Indeed that reason appeared within 20 seconds – African Lions, about 17 animals, came out of the shade of a large bush. A few lionesses were followed by several cubs. At the end of this beautiful lion parade came two massive male lions. 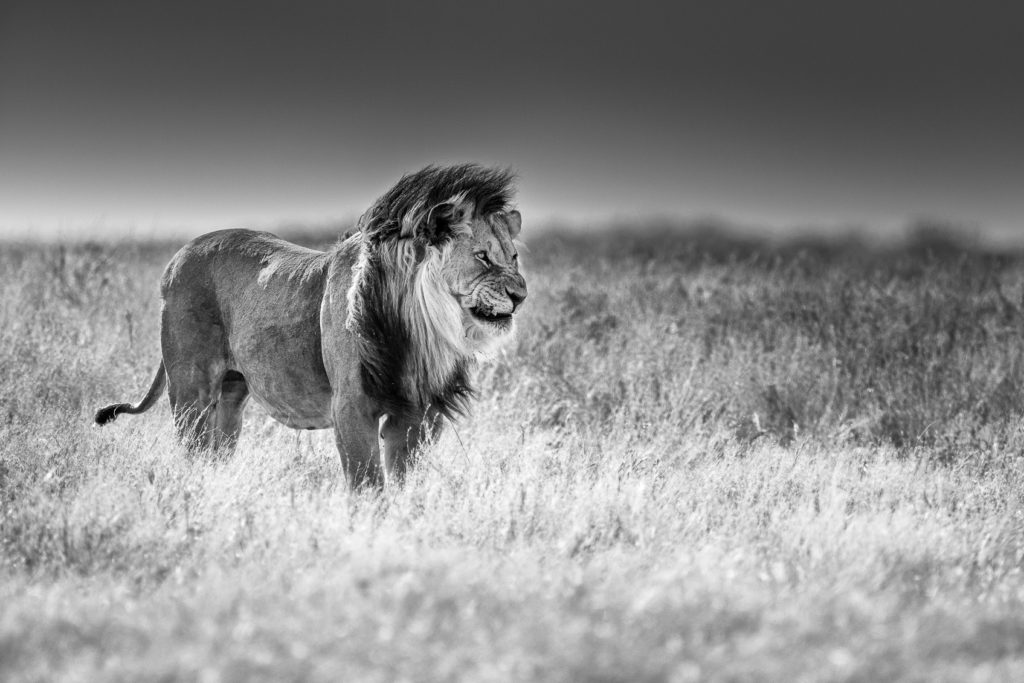 A handsome black mane Lion is standing in the grassland overlooking the Savannah. The proud male Lion in this black and white photo shows the Flehmen behavior. Obviously, he is picking up the scent of a lioness. A beautiful animal print indeed.

The two male lions were slowly walking down the hill, giving me some great photographic opportunities. The strong wind provides a nice add-on for the lion print with the two impressive lions. Their black mane always looks excellent when blown back from the strong wind.

These two African lion black and white fine art photographs I took of one black-maned single male lion. Since the second lion passed my jeep behind. Meanwhile, the lion pride has placed themselves close to a waterhole right at the edge of the natural Etosha Salt Pan. As usual, they were relaxing and waiting for the food to arrive and still their thirst!

Is a lion the 'King of the jungle'? 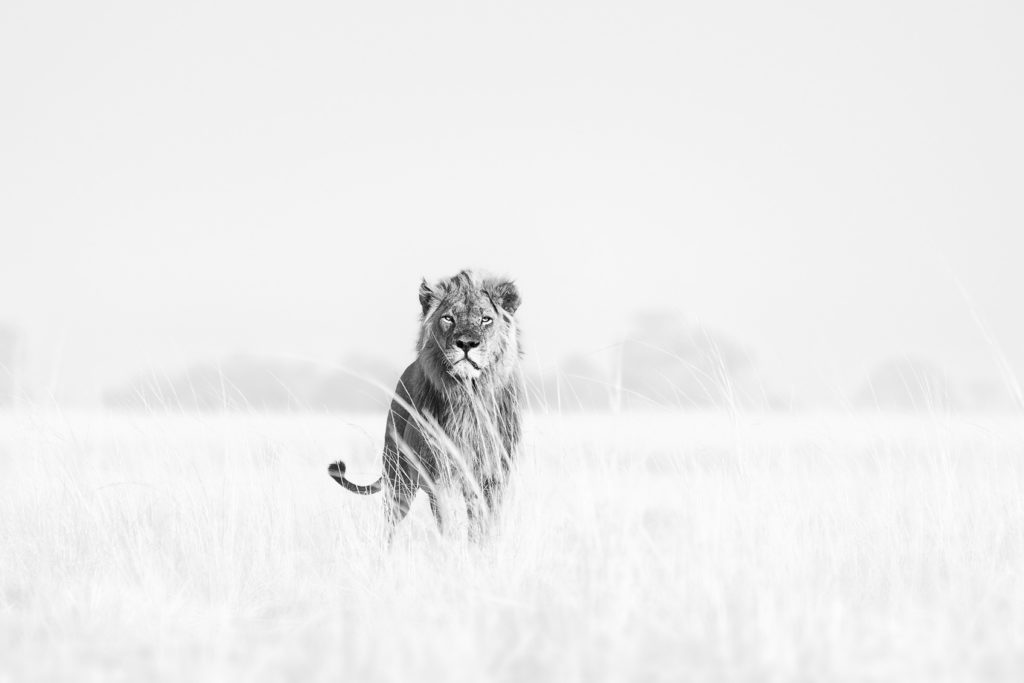 Majestic Male Lion Looking At You

The majestic predator is standing in the Savannah, staring into the camera. This beautiful proud animal came back from the Chobe River. His pride killed at night a smaller elephant, which was nearby this area.

Male lions are often called the ‘King of the jungle’ by children and adults. I am sorry to disappoint you. The habitat of the largest predator of the African continent is not the jungle. These dangerous animals prefer dense scrub, African Savannahs, and woodlands. Undoubtedly, in this environment, they can hunt best their prey. Most of the time, I find lions in open grassland or sleeping in the shade of bushes and trees. In a thick jungle environment, they would not be able to hunt down their prey easily! In our lion portfolio, you can discover more behavior of these majestic animals. browse our lion photos in color and monochrome at your leisure. 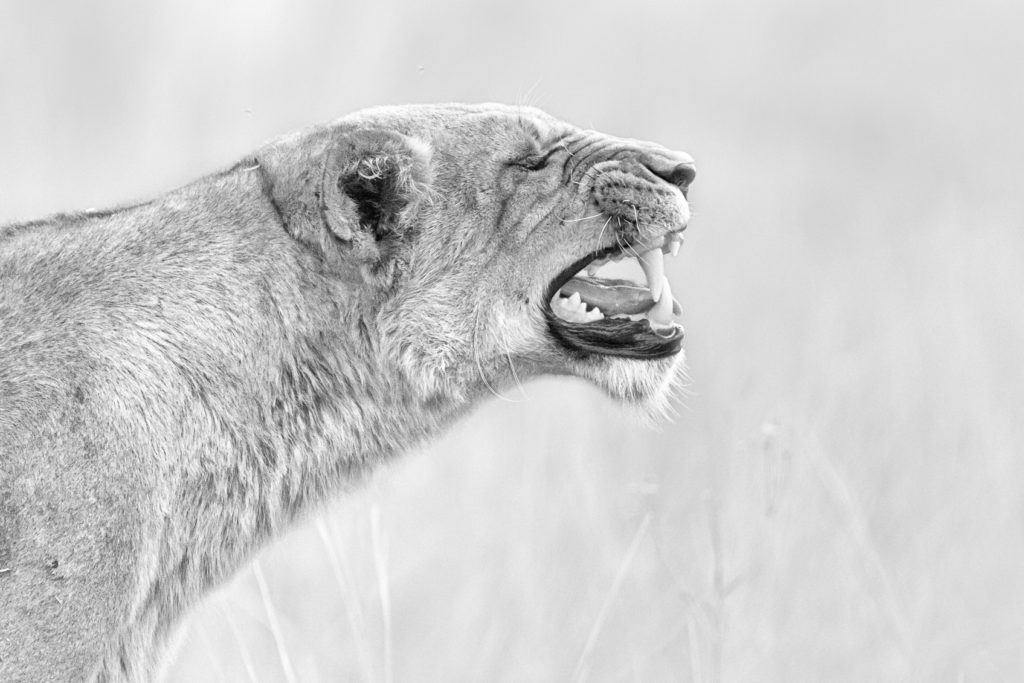 Never underestimate a lioness! A beautiful African lioness photograph processed into monochrome. The animal shows us her profile with her dangerous long canine teeth. Nevertheless, the behavior she shows we call Flehmen’s response.

Look at her canines, indeed impressive long teeth. We were following 5 lionesses along a river in the Okavango Delta in Botswana. They did play fighting while exploring the area and crossing the river. We had to find a spot to cross the river as well and not drown our vehicle. When on the other side, this Lioness above came close to our jeep. She picked up a scent and did the flehmen behavior 2-3x times. That allowed me to capture this animal’s head profile and process it into black and white wildlife photography as fine art. Find out more about these majestic creatures. 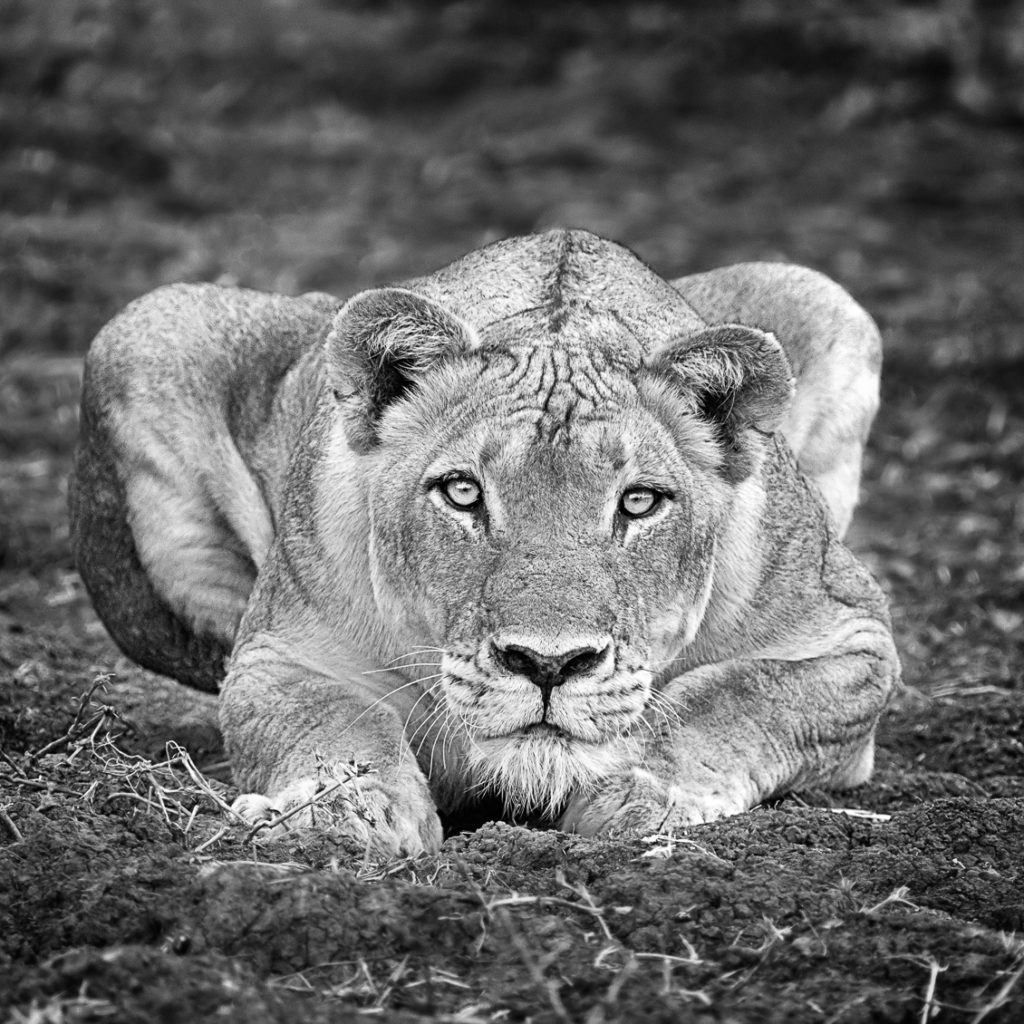 Lioness Staring Intensely Into The Camera

A black and white lioness photograph displays her intense staring into the camera. This lioness is ready to make the jump at the camera! Read my story about a Lioness stalking a wildlife photographer, that was myself standing on the menu card that day! 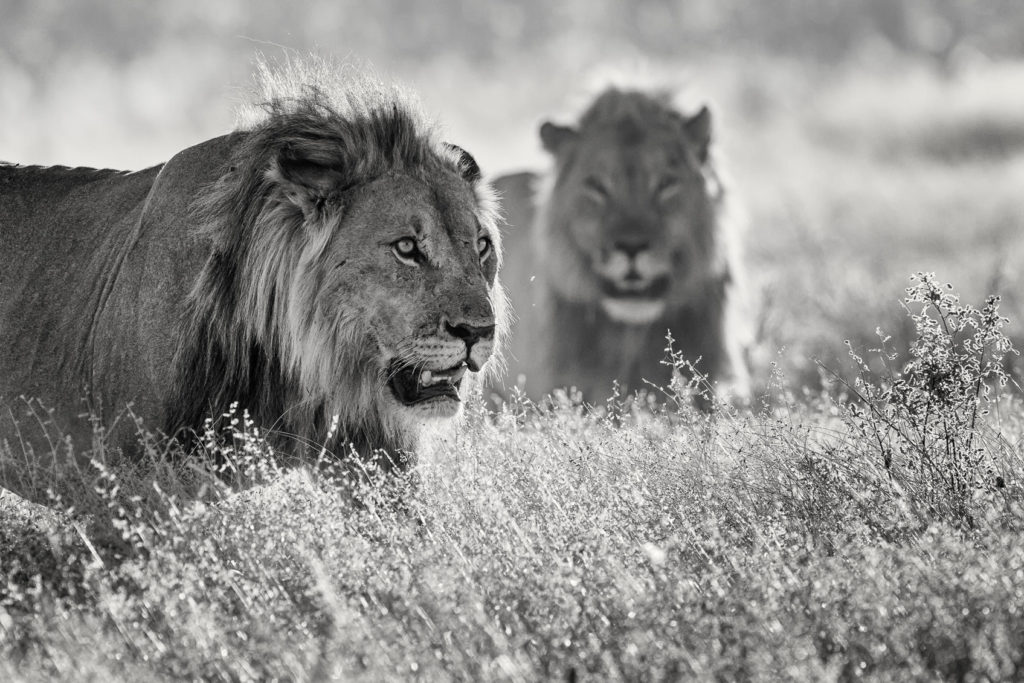 These two black maned lion brothers in this black and white Lion picture are browsing through the African bush. This photo of lions look stunning on fine art prints.

To see 2 male lions together is undoubtedly a fantastic sighting. Early morning these two black maned animals were playing fighting before looking for a nearby large bush to relax the day off. When the fun stopped, they search for shade. Then you know it is a relaxing time for the big cats. I do not know how often I was for hours, waiting patiently that the lions movement happens! Lion photography takes patience. When they sleep it can take all day until they move on. Indeed, I was staying with these two animals. It turned out, that it was all day. Yes, they move with the shade, but the action came only when an elephant herd passed by. The elephants were chasing the boys out of their way. In late afternoon they finally moved to the nearby waterhole. This gave me the opportunity to capture photos, including the above.

Discover more of my wildlife black and white wildlife photography. Furthermore, information about buying large photo prints of animals and landscape photos. We also sell our wildlife photos as stock images on our website.